We had a little time left over after we finished our Jesse Tree at children’s chapel on Sunday morning, so we got ahead and did some work on the task of drawing some pictures for the Christmas story for today’s task.

There were quite a lot of angels (because we’d just made the angel bauble for our Jesse Tree) but also the odd other item from the tree – Noah and his rainbow are there, as is a heart/flower combination representing Mary, and a wonderfully complex set of heart symbols for different ideas about God from one of our six year olds! 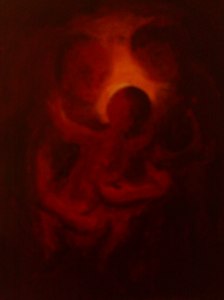 I was too busy picking up pens and pairs of scissors to draw a picture at children’s chapel, so here’s one I made earlier. It’s acrylic paint on canvas, and if you squint a little it’s the Holy Family. Mostly the colours are about the love that exists between the three figures, and that seems to me to be at the heart of Christmas.

For completeness’ sake, here is a poem that I wrote for Christmas last year – it’s really a sermon I wrote (which was based on the lovely Christmas collect that talks about heaven touching earth) then condensed into a sonnet!

Prophetic visions since the world began
(so far before salvation’s human birth)
would speak of God’s tremendous loving plan
for heav’n to touch the long-estrangèd earth.
Those ancient words at last began to be
in flesh and skin and bone and blood unfurled
In maiden womb and half-made family –
so heaven stooped to touch a fallen world.
Amongst the stable beasts behind the inn,
the baby’s eyes saw first a loving mother;
even though their world was full of sin,
yet heav’n touched earth for each in one another.
Now we cry for peace, goodwill to men,
and for God’s heaven to touch his earth again.